On October 3, 1942 the first rocket took off into space. The Germans had no idea that they had launched the birth of a ghost. It is called Bianca and she is the ghost of the rocket. In search of her origins, Bianca travels all over Germany and through time – from the cradle of space travel in Peenemünde to her planned future in Bremen. Tracing Bianca’s path, the film presents a character study of the rocket.

As the film proceeds, documentary merges with fiction, essential facts are mixed with minor trivia, earnest themes mingle with the comic, technology rubs shoulders with literature. The film is aimed at the heart of our fascination with modern technology, for which the rocket stands as its towering emblem. For „Test Stand 7“ (Prüfstand 7) the US cultauthor Thomas Pynchon has for the first time given permission for a partial filming of his rocket novel Gravity’s Rainbow in the mode of “film quoting”. Following this intention Teststand 7 integrates several ‘film fragments of failed attempts to turn GR into a movie’ in its narration.

An evaluation of Laurence A. Rickels for “Teststand 7” on the closing pages of his 2015 study GERMANY: A SCIENCE FICTION, p216ff: Bramkamp’s Test Stand 7 (2001)  reassembles the film history of the rocket by pulling the realized rocket back through Pynchon’s Gravity’s Rainbow. (…) Daughter, love object, and object of mourning, Bianca searches in Bramkamp’s film for her origin in the rocket, but she keeps running up against the so-called oven inside it, sparking the eternal flame in a place gone without mention. The eternal or internal feminine of mourning, however, cannot draw us onward by so direct a hit. Hence the film enters the blind alley of the figure of the severed and thrown hand to mediate Bianca’s search for the traumatic history internal to the rocket. The severed and thrown hand touches on the mystic significance of Antwerpen, even in name, as a target of the V-2 rocket attacks. It also joins in the mystery of a photograph of Wernher von Braun, his arm in a cast, taken at the moment he was crossing the threshold to his postwar assimilation, the mystery Kubrick perhaps revalorized as the reflex salute otherwise so hard to contain in Dr. Strangelove (1964) . From Ernst Kapp through Freud and McLuhan, the detachable hand waves through the prosthetic understanding of our relationship to technologization. In Pynchon’s novel, the rocket (as in Friedrich Kittlers’s genealogy of media) opens up a technological horizon of auto-development before which the prosthetic or humanist reach of our following falls short. And yet, to the extent that technologization cannot be separated from the European culture of death diagnosed in the novel, the prosthetic relation comes to be reinserted in our effort to understand and make amends for violence that we cannot but consider as externalized in our technological relation. To make reparation, commence integration, and aim for the onset of the ability to mourn, we reclaim our prosthetic responsibility for the automatic course of technologization, auto-accelerating by velocities or computations that our intellect cannot overtake.  In „Test Stand 7“ (Prüfstand 7), a relay of direct hits on the repressed past alternates with blind alleys of allegorization. We move closer to mourning’s admission of a collective or global work. Otherwise mourning would be the prerogative of individuals or couples and group commemoration would be solely a forum  of denial. Judith Butler’s reconsideration of mournablility and unmounability (no longer from the glamorous perspective of undeath, but from the point of view of the living) was not, then, a late arrival of the study of repressed mourning. Instead it was a timely reflection of a chance or change for the new in our setting of digitalization. (…) To address problems and processes that are, as we say, bigger than the two of us, Bramkamp brings us closer to his goal, collective narration, which must be extended to mourning. We will catch up with deferred individual mourning only it the possibility of collective mourning can be reclaimed form the denial.“ (Laurence A. Rickels ) 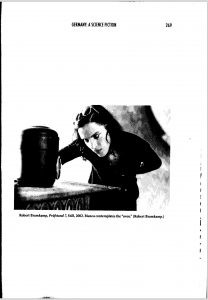 designed and implemented by Kris Lüdemann